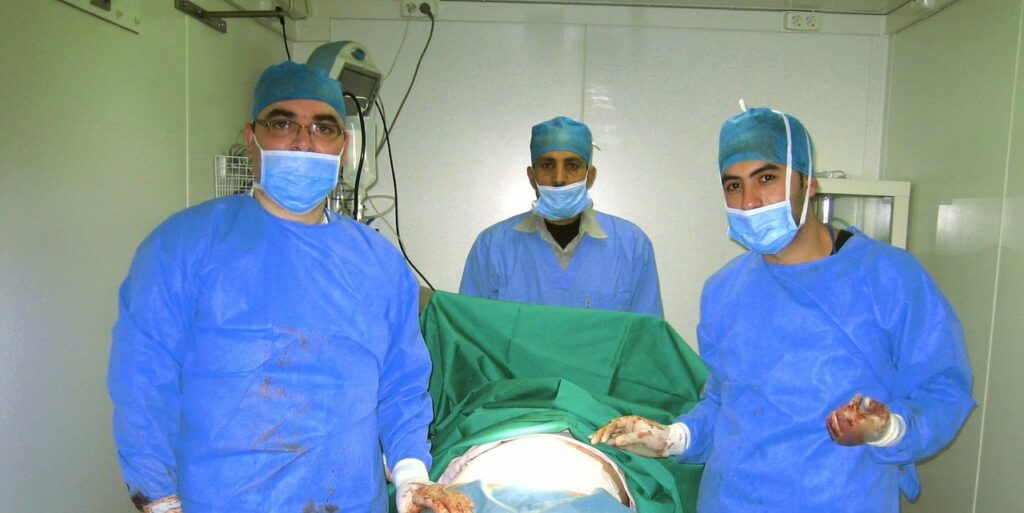 In the summer of 2013 the refugee-flow in and outside of Syria reached a new disastrous low point. More than two million Syrians fled across the national borders and, internally, more than 6 million people were displaced.

Homs is one of the epicenters of violence and Mother Agnes together with Cordaid, the Syrian Red Cross, Dorcas and Hospitainer are commited to serve these refugees and victims of the war.

At the end of 2013’s summer a Hospitrailer was therefore been sent to Homs-Syria. This clinic consists of a 40 ft container installed on the trailer of a truck. Inside an operation- and recovery room were built as well as a sterilization area.

Furthermore, the facility is equipped with a generator, (waste) water tanks, air conditioning/heating and of course instruments and medicines to cover more than 2,000 operations on an annual basis.

Because of continuous fighting and the American threat of bombing Syria after the poison gas attacks, it was not possible at first to install the trailer next to the University building that was supposed to function as a ward.

Nevertheless in the fall of 2013 the trailer was finally put into operation and people started to find their way to the clinic. In December, the first baby was born through caesarean section. Now the trailer is in full use Hospitainer will continue to monitor the progression to assure its optimal use.

Watch:
>>SBS’s movie about the the Hospitrailer for Syria (Dutch)

The Hospitainer Mobile Surgical Unit is developed to facilitate both minor and major surgeries. The surgical unit is a high quality medical solution ...